What is Gut Directed Hypnotherapy?

Gut Directed Hypnotherapy is a hypo-therapeutic treatment specifically designed to treat the symptoms of IBS.

In the early 1980′s, a Professor of Gastroenterelogy, Prof Peter Whorwell of South Manchester UK was finding that conventional medical treatment was not helping his patients with IBS. At the time, he had an interest in hypnotherapy and thought to apply it to help his patients relax more. What he found however surprised him. He found that his patients improved. This resulted in Prof Whorwell undertaking research trials to confirm his findings. The results initial results demonstrated a 70% improvement in reducing IBS patients symptoms. This led to research publications and further studies exploring colonic and non colonic symptoms, quality of life, and anxiety and depression. He found that not only does hypnotherapy improve colonic symptoms, but also improves associated anxiety and depression and overall quality of life. These improvements were followed for five years and found to be maintained at approximately the same level on completion of the treatment.

What does the treatment involve?

The treatment program normally involves 4-6 weekly sessions (the amount of sessions may vary based on each individual's needs). Your psychologist will discuss the treatment plan with you in your first session. Gut Directed Hypnotherapy is a special form of hypnosis that is specifically designed to treat functional gut disorders like IBS. 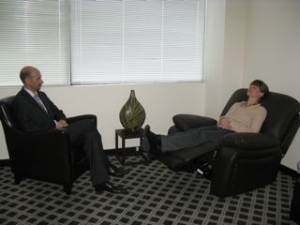 All it involves is the individual sitting back and listening to the therapist. Its that simple. At no point are you not in control.

During treatment you may also be given self hypnosis recordings in which to practice with on a daily basis for the duration of the treatment. This is an important compliment to treatment success. The aim is to reinforce positive change and teach you self hypnosis skills to use at anytime.

When am I likely to see results?

Generally, patients will show improvements within 4-6 sessions. Some may require extra sessions to achieve optimal results, a treatment plan will be discussed with you by your Psychologist.

Does it work for everyone?

Both research and clinical experience show that 70-80% of sufferers will benefit from the treatment, however it is not known why some people do not respond as well or benefit completely.

Can everyone be hypnotised?

We all have an innate ability to be hypnotized, and we experience altered sates of consciousness in out day to day lives, in the form of intense focus, daydreaming or light sleep. With GFH, one does not need to be able to go into a deep trance to experience a positive outcome. In other words trance depth is not indicative of treatment success.

Can the symptoms return post-treatment?

Long term follow up studies show that treatment success is maintained for up to five years. This does not mean it will reappear after 5 years, the study only followed the patients for 5 years. It is not unusual for some patients to relapse only to return for a follow up session or two to re-establish positive outcomes.

Will all my symptoms disappear?

Some patients achieve complete removal of symptoms, some only achieve a reduction. These reductions in symptoms are enough to help the suffers mange their symptoms to where they can get on with their lives again. It is important to note, if the treatment does not improve the symptoms, it has been shown to still improve their coping and quality of life.

Research has also found a number of advantages of using GFH.
These include:
A return to work or school
Less time off work
Increased effectiveness at work
Less GP consultations for IBS and non colonic symptoms.

According to a study conducted by Prof Whorwell and colleagues, they found: